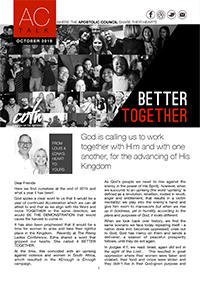 God is calling us to work together with Him and with one another, for the advancing of His Kingdom

Here we find ourselves at the end of 2019 and what a year it has been!

God spoke a clear word to us that it would be a year of continued Acceleration which we can all attest to and that as we align with His Word and move TOGETHER in the same direction, we would BE THE DEMONSTRATION that would cause the harvest to come in.
It has also been prophesied that it would be a time for women to arise and take their rightful place in the Kingdom. Recently at The Rising Ladies Conference, Edna shared a word that gripped our hearts. She called it BETTER TOGETHER.

At the time, this coincided with an uprising against violence and women in South Africa, which resulted in the #EnoughisEnough campaign.

As God’s people we need to rise against the enemy in the power of His Spirit; however, when we succumb to an uprising (the word ‘uprising’ is defined as a revolution, rebellion, rooted in revolt, anger and entitlement, that results in a victim mentality) we play into the enemy's hand and give him room to maneuver but when we rise up in boldness, yet in humility, according to the plans and purposes of God, it looks different.